Observations on a real winter and watching it rain…

Everyone knows that old saw about the weather: wait ten minutes and it will change. As I sit here on Feb. 20 looking outside at snow, watching lightning and listening to thunder, I wonder… is this someone’s idea of a joke?

The birds have been very entertaining and stories have been playing out all winter. I’ve watched them huddle in our evergreens, and in the weeping purple beech and climbing hydrangea that are close to our house during the subzero days.

Michael asked the same question I did, but mine was not about cardinals. What is with that titmouse that has been singing in the serviceberry for the past three weeks? It turns out HE is looking for his next mate. Hopefully, she will show up before he loses his voice.

We have an enterprising Cooper’s hawk who has scoped out our feeders. Patience is something we humans often lack, not so a Cooper’s hawk. Picture the hawk, sitting in our ginkgo tree, 25 feet from the feeders, waiting for the right moment. In a flash she* streaks to the feeders and is back in the tree with a male house finch clutched in her talons. The feeders are clanking together and there is not another bird in sight. Various birds have been breakfast or lunch for this hawk, even a large mourning dove.

One day her patience was not rewarded. Several birds sat in the serviceberry not moving. Birds preen, flutter, shake or do any number of movements as they wait for their turn at the feeders. No birds at the feeders, one mourning dove huddled against the house also not moving, no hawk in the ginkgo… so this human went outside to investigate. The hawk was three feet above me, sitting on the gutter right above the feeders. I am imagining the look of disgust she gave me as she flew away; hungry. 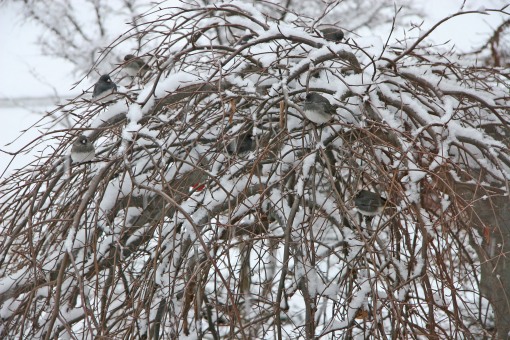 Every year I’ve watched for the color change in the male goldfinches. Like the titmouse this is a signal that the male goldfinch is ready to breed and looking for his lady-love. Their drab gray-yellow plumage transforms to pure gold. Even though birding books state that the change occurs in mid to late Spring, I will swear that I have observed one male goldfinch that is sporting more golden feathers than the others that are visiting our feeders.

While watching the birds I am noticing the difference between the bloom “show” from last year to this year. If this year seems to be extremely cold, consider the Winter of 2012-13 which was extremely mild. We had an extended warm-up in January and February. At this time last year, my snowdrops had been up and blooming for three weeks. There is nary a sign of them in any parts of my garden this year.

There are more winter animal and plant stories and they are all down in my journal or captured by my camera. I will enjoy them next year as I try to remember what happened when.

* I’m guessing. Females are a larger than the males – and she is big – but I did not have the opportunity to measure her.