See what modern mums have to offer 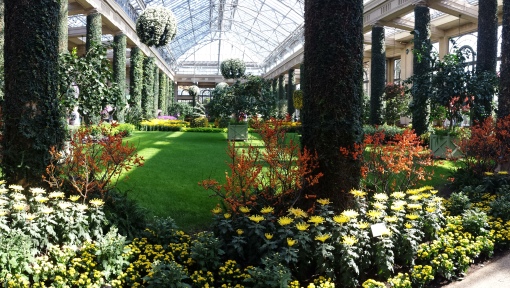 “If you would be happy for a lifetime, grow Chrysanthemums.” (A Chinese philosopher)

This Chinese philosopher certainly would smile if he saw how widespread these “mums” have become as the darling of today’s fall floral displays. In fact, I recently was one of thousands visiting the popular Chrysanthemum Festival at Longwood Gardens in Kennett Square, Pa. Inside Longwood’s four-acre conservatory, more than 80,000 chrysanthemum blooms are nurtured and trained into inspiring forms, including shields, spirals, cascades, balls, and even a 10-foot tall yellow chandelier.

The crown jewel of the display was the Thousand Bloom Mum—featuring more than 1,500 perfectly arranged flowers—the largest of its kind grown outside of Asia.

Gaining more respect for this mass-marketed fall favorite, I recently visited the National Chrysanthemum Society’s website to learn more about this plant’s rich history. Check out these fun facts:

One response to “Favorite Flora: Chrysanthemums”