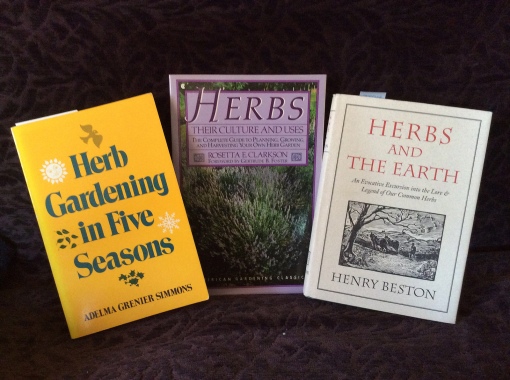 November is a time when I revisit books that are old, and sometimes forgotten, friends. We’ve all heard the dire pronouncements: books are becoming obsolete, the web is killing the publishing industry and more. Yet, in this time of early evenings, colder temperatures and even snow, it is a cup of tea and a good book that are my preferred companions at the end of the day. 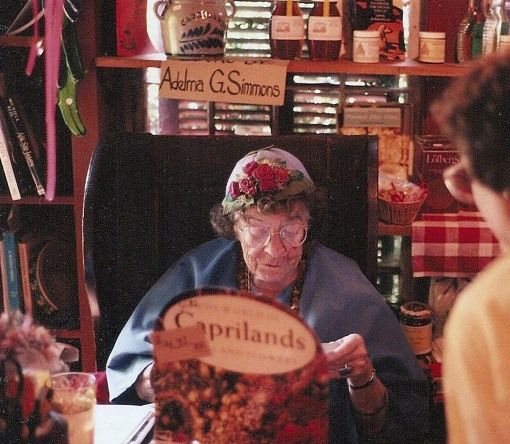 All three of these writers are also my teachers.  Each has given me pieces of wisdom that have become part of my personal and professional ethics. Each has settled into my garden heart.

How do we choose books? Often it is a catchy title that entices. Herb Gardening in Five Seasons by Adelma Grenier Simmons had me at the title. So what is the fifth season? A season that has a feeling all its own: Christmas. Adelma Simmons wrote this book in 1964 when herbs were beloved by gardeners, but they weren’t the mainstay of gardens as they are now. She brought herbs to the attention to many through her books and her extensive gardens, Caprilands, in Coventry, Connecticut. She influenced my herbal education greatly. Adelma died in 1997 at the age of 93, seven years after I read one of the many reprints of her book. 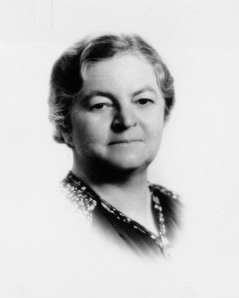 Still on my herbal journey, a year and a half later I found another classic, Herbs: Their Culture and Uses. Rosetta Clarkson penned three books. Magic Gardens (1939) and Green Enchantment (1940) preceded Herbs: Their Culture and Uses (1942). Her style of writing is very personal in all three books. While reading her instructions and advice I felt as if she was talking to me. Rosetta gardened just outside of New York City and along the coast of Connecticut. My favorite of her three books was Green Enchantment, but it has disappeared from my bookshelves; probably lent out and never returned.

In between these two authors I found and fell in love with another author whose poetic prose took me to the places he described. Another east coast writer, Henry Beston wrote Herbs and the Earth (1935) while on his farm in Nobelboro, Maine. He penned one of my favorite quotes –

“A garden is the mirror of the mind. It is a place of life, a mystery of green moving to the pulse of the year, and pressing on and pausing the while to its own inherent rhythms.”

And, I would like to offer you a quote from Adelma as you contemplate (dread?) the approach of winter:

“The quiet aloneness of winter has a special charm for the herb gardener, and I confess this season is my delight. Through the restless, rushing hours of spring, and the long days of summer that begin at dawn and end with weeding in the twilight, I find myself looking back at the peace of winter and forward to the next one. The winter landscape, bare and stringent, reveals a beauty of form and line that is not visible in the spring and summer.”