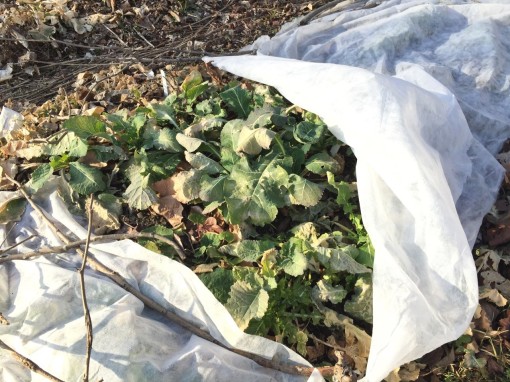 Row covers seem to reduce wind burn, allowing cold-tolerant greens a chance to survive winter. I picked a few leaves from these collards, planted in late summer, in early February.

Cold frames, solar-heated grow boxes, are as utilitarian as shovels and trash cans. Mine, constructed of salvaged bricks (for passive solar heating) and a window sash from an old aluminum storm door, is especially homely. Although a commendable example of up-cycling, it’s hardly worthy of Martha Stewart.

Fairy gardens, on the other hand, appeal to the imagination. This is where Barbie does gardening with cute little plants and adorable accessories to match every outfit. Macho versions also exist, from farms and ranches to Jurassic jungles with plastic dinos. No doubt succulent-studded landscapes worthy of Star Wars also exist somewhere in the galaxy.

Despite its lack of visual appeal, the cold frame oozes charm. It’s an excuse to dabble in the dirt long before (or after) the growing season. For cabin fever crazed green thumbs, this is as much a draw as the most elaborately accessorized fairy garden.

The only accessory in my cold frame is a row marker for the kale planted January 30.

Yes, January 30. That’s part of the appeal of cold frame gardening, a chance to plant in a reasonably safe environment “when all aloud the wind doth blow … and birds sit brooding in the snow … .” as Shakespeare observed. Beneath the glass cover, the wind won’t blow the little kale, spinach, collards and other tough greens. Inside their miniature world, the weather is more late-March or early April, which is about planting time outside in this part of the Midwest. And that’s only if soil and weather conditions cooperate.

Besides an early start, I’ve found the cold frame eliminates the tedious business of coddling seedlings for weeks indoors under lights or on windowsills. This is child’s play for many growers but somehow I usually manage to dump trays when watering or being klutzy. 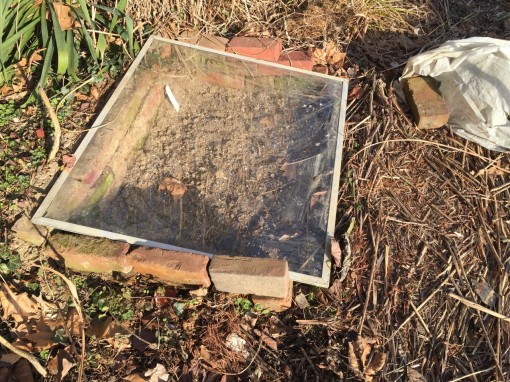 Cold frames can be constructed of many types of materials. Mine is made of salvaged bricks and a window sash.

Cold frames aren’t foolproof. Because a vicious blast of late winter might prove too much, additional sowings are planned about every two weeks or so.

Another threat is neglect. Even cool sunny days can turn a cold frame into a solar oven. Monitoring is a must to keep the lid ajar as needed. Temperature controlled hinges are available for ambitious gardeners. They’re the sort who use cold frames for: wintering plants of questionable hardiness, forcing spring-flowering bulbs, starting summer flower and vegetable seeds, and sowing fall crops that will linger into winter.

Besides cold frames, floating row cover serves as a season extender. The lightweight fabric is made specifically for agricultural purposes. The sort I use is designed to ward off insects not frost.  Yet it has been sufficient most years to help spring-planted greens survive all winter and produce a flush of new foliage the following spring. When this happens, the plants eventually burst into  sprays of cheery yellow flowers that delight bees.

Googling “cold frames” and “floating row cover,” not to mention checking the gardening sections of public libraries, produce a plethora of ideas for creating and using these warming environments for early — and late — season gardening.

Now that I think about it, maybe a miniature red tractor and some tiny fencing would add a dash of whimsical charm to the kale seedlings when they emerge.