Happy Thanksgiving to our wonderful Heartland Gardening friends! In honor of the holiday, we borrowed a few lines from Elizabeth Barrett Browning’s Sonnet 43.

1)              A bounty of fresh produce that tastes even better when planted with our own hands and served at peak ripeness and flavor. 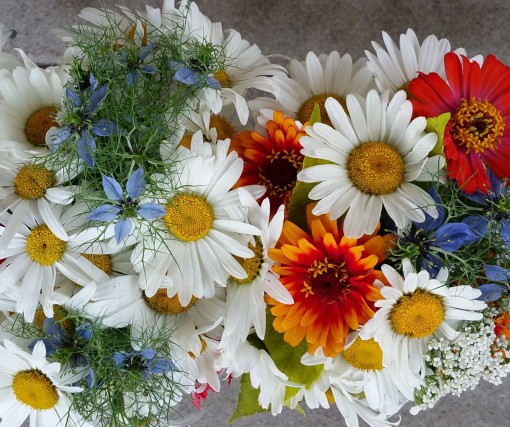 3)              An ever-evolving meadow that’s a welcome habitat for finches, hummingbirds, Monarchs and swallowtails. 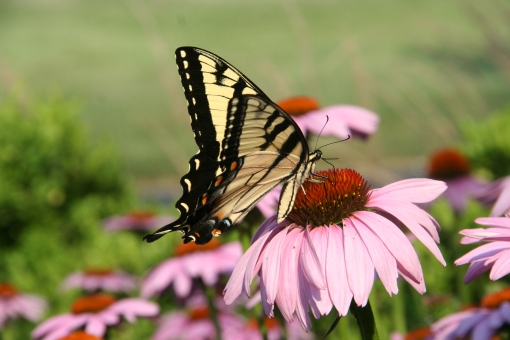 4)              A collection of spring ephemerals and other pass along plants that are a delightful reminder of the friends and family that have shared them with us.

6)              The physical and mental benefits of gardening chores. Raking leaves not only results leaf mulch and strong arms but also a chance to relish the lingering fall season.

7)              Being nurtured by simply sitting in the garden, gazing in silent wonder at all the forms of plants and animals — God’s incredible creativity.

8)              The promise of spring that comes wrapped in little brown bulbs that we plant in the fall when the garden is moving into dormancy. 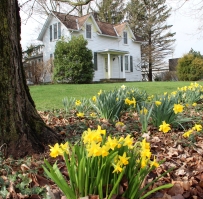 9)              Realizing that my garden is perfect in the moment and if there is something that needs changing, there is always next year.

11)          For all the friends we have made through the years because  of our shared interest in plants and nature.

The Signs of Fall: early, late and unusual

On the morning of November 10th I woke up to the first frost in my garden caused by temperatures in the high 20s. The overnight temperatures dipped into the low 30s the week before, but because of microclimates caused by tree cover and topography, no frost touched my plants.

We are experiencing what some call seasonal shift. Weather is variable. This is a given. Two years ago Central Ohio experienced an early frost – October 3rd – which was followed by an extended warm spell. This year the occurrence of the first frost in early November makes it the latest in my gardening life.

What does this mean for our plants? On the bright side, if you were behind in your vegetable garden clean-up, you have enjoyed an extension of the tomato, pepper and squash season. But the weather could interfere with plants going dormant for winter.  The ground has stayed warmer longer and this could interfere with the process of plants getting ready for the winter; “going” dormant. If our temperatures take a rapid dive down and stay there, this could affect growth for next year.

Think of it this way. The soil is still warm which promotes growth. But the ambient air temperature is cold so the signal to the plant is: go dormant. (Temperature is not the only factor that affects a plant’s dormancy process. Decreasing light levels have an effect on the dormancy “countdown”, too.)

Talk about conflicting messages! Which signal should the plant respond to? Send energy to support new growth at shoot and branch tips or keep the carbohydrates stored in the roots for next year’s growth? It is a plant dilemma.

Tomatoes and squash aren’t the only confused plants. Here purple coneflower (Echinacea purpurea) is sending out a few late October flowers. Note that there are new leaves emerging from the crown and the new flowering stems are short; about 6” tall. Contrast that with the stems from summer which are brown and done for the season. The only reason the stems are still there is the seedheads – not present in this picture – which I have left to feed the birds that visit my garden. This plant is responding to an extended warm fall. You also see fall blooms on magnolias, rhododendrons, and other woody plants that have already produced their flower buds for 2017.

Will this affect next year’s growth? Probably not for most herbaceous plants. For woody plants it depends on the species, how much growth is pushed out-of-season and how quickly the temperatures fall and then stay in the teens, 20s, and low 30s.

While the fall growth and bloom of the purple coneflower is uncharacteristic, consider the blooms and leaves of the hardy cyclamen (Cyclamen hederifolium). Its life cycle is opposite most of our garden plants. It blooms in late August though early October then its leaves emerge in late September, last through the winter, and go into dormancy in late spring when temperatures rise. This year, the flowers started later and lasted until October 31st. 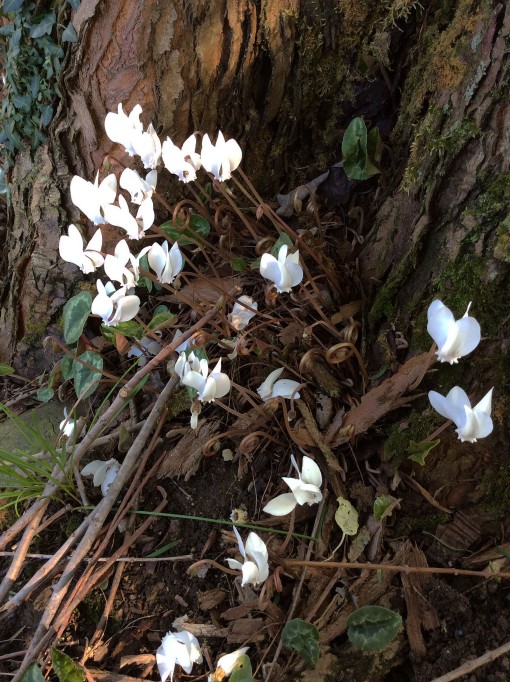 Above is hardy cyclamen in full bloom on October 2nd. This is later than in previous years. Usually full bloom is mid-September with a few flowers remaining in early to mid-October. Notice the coiled flower stems; these are the developing seedheads. The coiled stems bring the seedheads close to the ground where ants harvest the seeds for the coating on the surface. After removing the coating, the ants discard the seeds. I mention this in case you have wondered how some of your hardy cyclamen moved up to 50 feet away from the main planting.

On October 31st there are still a few flowers and the leaves have fully emerged. These leaves will remain under my dawn redwood through winter and early spring.

Another sign of a later-than-usual fall is the blooming of the nasturtiums along the deer fence around our vegetable garden. These tender annuals from Central and South America usually succumb to light frosts. This is November 8th which is unprecedented in my garden. However, after an overnight low of 28 in the early hours of November 10th, it became a pile of mush.

Borage, a prolific self-seeding annual, also took advantage of a late fall. This is a seedling of a plant that I removed from the garden because it had reached the end of its flowering life. I scattered its seeds so that I would have a full stand of borage for next year. But what I have is a lot of seedlings now. My fingers are crossed; hoping some seeds did not germinate so that there will be a 2017 stand of borage. 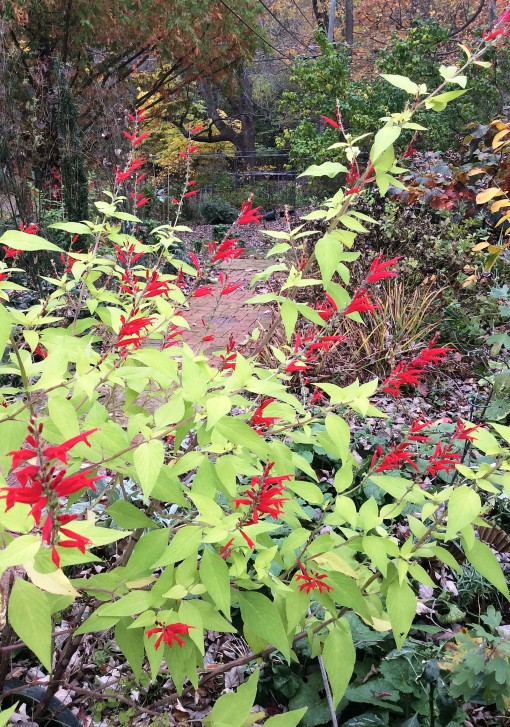 Golden Delicious pineapple sage (Salvia elegans ‘Golden Delicious’) is a tender perennial from Mexico and Guatemala, cold hardy in Zones 8-10. Usually it blooms in September, in time to be one of the last food sources for hummingbirds. This year its blooms were too late. Hummingbirds take off for warmer climes by October 1st, and my pineapple sage plants did not bloom until the second week of October.

Over the years I have observed the differences between the plants in my backyard and front yard with respect to plant emergence, bloom times and senescence. It is a mixed bag of results, but one species I felt I could count on to be “on schedule” is Ginkgo biloba. The trees in the backyard show their fall colors at least three weeks before the one tree in the front yard. The back trees drop their leaves by the first week of November, and the front tree starts dropping leaves a day or two before Veteran’s Day. 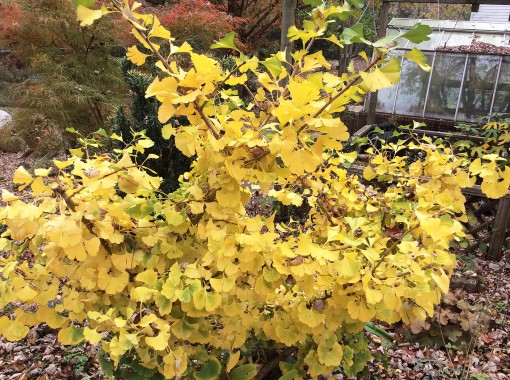 Above is Stupka ginkgo in the backyard that still has some green-tinged leaves and as of Veterans Day, dropped few leaves. Below is a branch from the front tree on Nov. 10th, but the fall color is only edging the leaves. On the 11th, more branches have solid golden leaves, and there is no sign that the rain of ginkgo leaves is about to begin. That may not seem like a significant difference, but I have watched this tree for 30 years and have raked leaves out of the thyme lawn under the ginkgo every year before Veterans Day. November 12th update: ginkgo rain has begun, but it is slow and intermittent. The overnight low was 28 degrees and that frost signaled the ginkgo to let go. The leaves on the ground are all gold. I’m predicting that the gold-edged leaves will fall last without transforming into gold. 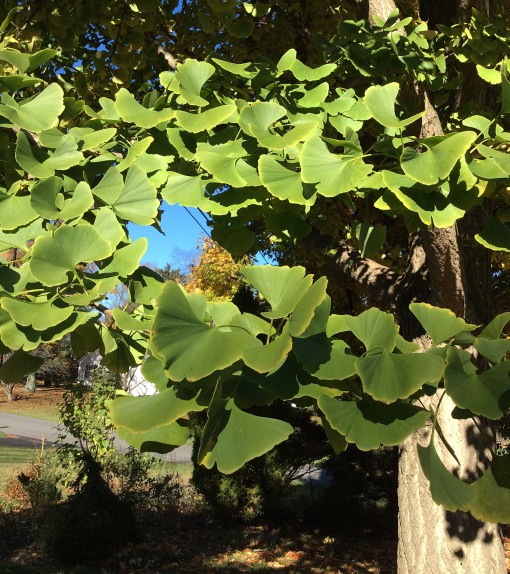 Autumn Glory Comes in Many Ways

The perennial queens of the fall garden are the asters. They offer butterflies, bees, wasps, flies and more the last nectar feast of the season. My asters are always late, often not blooming until mid-October and continuing until a hard frost. I have taken them for granted. So I have no data for you, just an entreaty to plant them as they support so many of our garden residents. Below is October Skies aromatic aster (Symphyotrichum oblongifolium ‘October Skies’) cascading over a log. The other aster image shows a bumble bee caught by cold temperatures. She was not moving early (7:00 am) on the 10th.

Unfortunately I had to remove an ailing Engelmann spruce. In the top branches, I found another sign of fall: an eggcase of a Carolina mantis. I am ecstatic. I saw a pregnant female during the 2015 gardening season, but hadn’t seen any of her progeny this past season. Here’s proof that someone was here. I tied this branch to another tree outside and look forward to seeing baby Carolina mantids next spring. 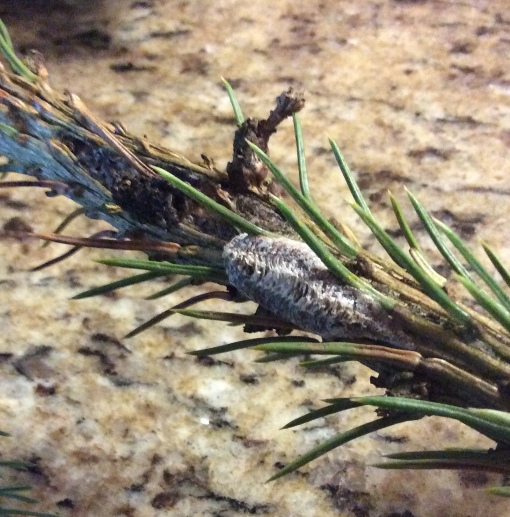 One last example of the variability of fall and this season in particular is expressed below. The spicebush – deep gold color in front – is on time with its color and leaf drop, but the pawpaw in the background are not quite at their peak, solid golden color. Usually these two plants are in color together. Please pardon my anthropomorphic wonderings… but, it seems that the spicebush kept to its schedule, but the pawpaws took advantage of the extended, warmer fall by not shutting down their chlorophyll factories. This led me to think about which attributes will determine the success of a plant in a time of climate change. Flexibility and the ability to adapt will be high on the list.

Coda — November 13 in the early morning hours, the temperature fell to 23.1 degrees. While at breakfast I watched as the front yard ginkgo lost all of its leaves except for the ones that had not changed. Now at 9:30 a.m., one by one, even the green leaves are falling. It is mesmerizing.

Traffic-stopping maples and forests aflame in gold, red, yellow and maroon foliage grab most of the attention in autumn. They should. Yet nature also offers visual delight that must be carefully sought out when scanning the fall scene. The rewards of such a leisurely pursuit are the grace notes of this splendid season. These small treasures range from dogwoods to tomatoes.

Dogwood trees are among those that make spectacles of themselves with dark red fall leaves. Their berrylike fruit adds a bit of sparkle — and a popular bird food.

Avian visitors, however, ignore the almost gaudy fruit of Callicarpa or beauty berry. These remain until early winter in my garden.

Autumn crocus flowers last only a few days but their overnight appearance surprises and delights. Plus they serve as a hope-filled reminder their spring-flowering cousins are only a few months away. 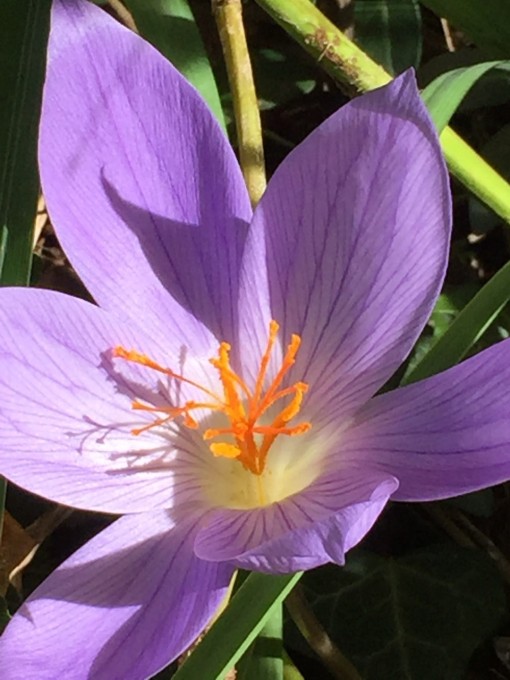 Raindrops on fallen and fading leaves show nature’s magnificent artistry can be found on the forest floor as well as in the branches overhead. 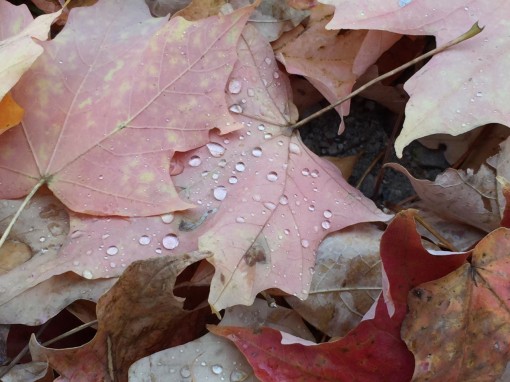 While the flavor of tomatoes fades at bit with cool weather, their jaunty, party look lasts until frost. 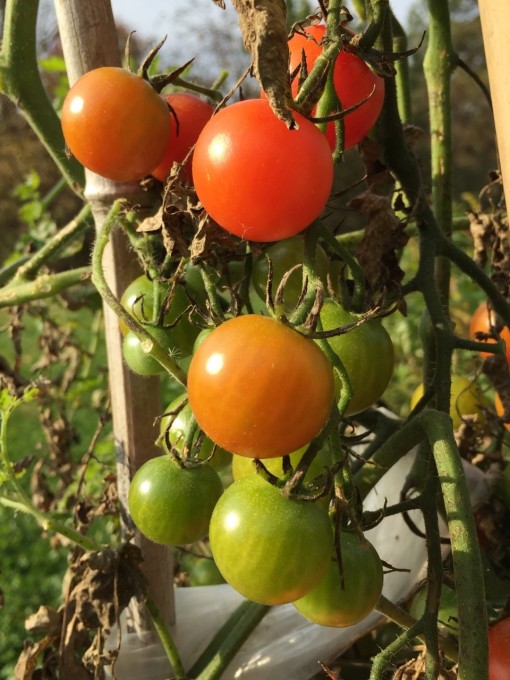 The woody stem and smooth skin of a pumpkin makes an appealing combination that lasts far longer than a mere jack-o-lantern.