Can gardening save the nation? 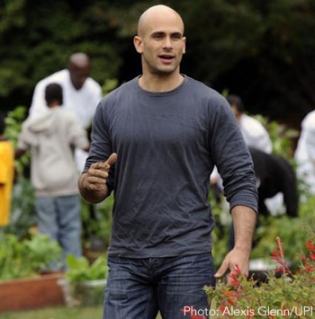 Too busy to eat together as a family? Who isn’t?

President Barack Obama and his family. According to Sam Kass, assistant White House chef, the President eats dinner with his family each evening, unless he’s out of the country. And vegetables and herbs from the White House veggie garden — the first since the 1890s — may be on the menu.

I suppose setting an example, if only to their own children, much less a nation of couch potatoes, is part of First Lady Michelle Obama’s Let’s Move campaign against childhood obesity.

According to the Let’s Move website, one-third of America’s kids are overweight or obese. But it’s almost 40 percent among African-American and Hispanic communities. A third of the children born in 2000 or later will suffer from diabetes. Other health problems stemming from obesity include heart disease, asthma, sleep apnea and social discrimination.

Scary stuff — but gardening can help. (Some of you may be doing your part in community or school gardens or nutrition programs. If so, let us know about it.)

This month, Kass covered some of what is happening at the national level and shared behind the scenes garden stories in a keynote program at OFA, one of the nation’s largest horticulture trade shows. The annual event held in Columbus includes educational courses on topics as diverse as managing a garden center to solving greenhouse bug problems.

Battle lines against obesity are drawn, not at the Pentagon, but in the White House vegetable garden and school ground gardens across the nation.

Kass frequently swaps toque for trowel. He probably worries more about the veggies than a dozen ordinary growers. With 100 members of the press covering each garden-focused event at the White House, who wouldn’t worry if the peas shrivel or a kid spits out that first bite of fresh broccoli?

So far nothing like that has happened but there are mistakes, just like in our gardens. Take the Thomas Jefferson fig.

Despite his coddling, Kass said the fig tree, a type grown by Jefferson at Monticello, sulked during its first year and was only marginally happier in the second.

One morning it was gone.

He found the wilted Thomas Jefferson fig in the compost pile! Apparently a volunteer gardener thought it a weed amongst the mint. Sam replanted and nurtured but it still looked distraught. This year, probably because of the hot summer. it grows lushly and is loaded with fruit. He calls this the “Little Fig that Could.”

Maybe those veggies and the school gardens planted as part of Let’s Move will help defeat fat. 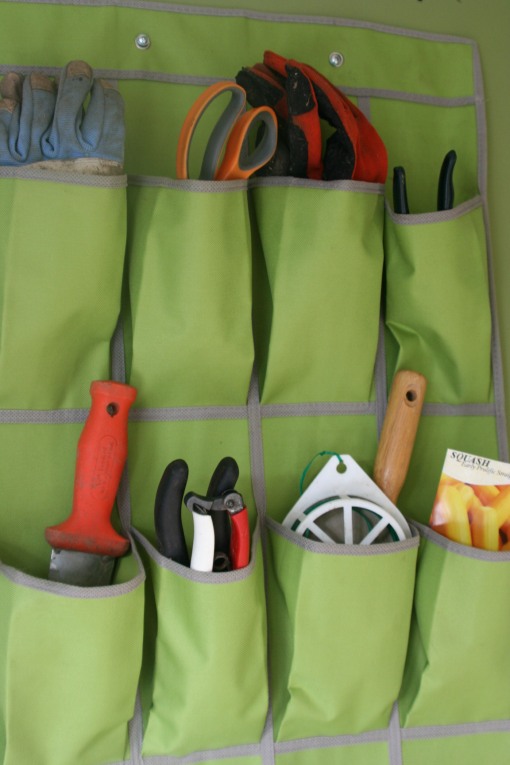 Tool storage at the back door — thanks to an upcycled pocket shoe organizer.

Without a bit of fanfare, at least one North American native plant is retaking ground covered by that odious invader — garlic mustard.

Clearweed, Pilea pumila, which grows throughout the eastern two-thirds of the U.S., has evolved resistance to garlic mustard and is striking back. Garlic mustard succeeds so well because it produces sinigrin, a chemical that kills fungi needed by native plants to extract nutrients from the soil. This chemical warfare gives garlic mustard an enormous advantage. 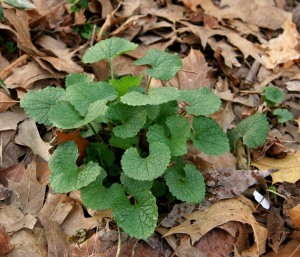 I learned about this encouraging development from a periodic news wrap up from the Garden Writers Association. A story about the University of Georgia study appears in the American Nurseryman http://www.amerinursery.com/blog-2957.aspx.

The article quotes Richard Lankau, the study’s author: “The implications of this study are encouraging because they show that the native plants aren’t taking this invasion lying down.” He adds, “If you were to take a longer view … exotic species could become integrated into their communities in a way that is less problematic for the natives.”

Only time will tell.

Meanwhile, it turns out some native plants are take-over thugs, too. In a recent Ohio State University Extension newsletter I read about the enchantingly beautiful American lotus. I saw some flowering along a Virginia roadside recently and was instantly captivated.

The native lotus is listed as “threatened” in Michigan and “endangered” in Pennsylvania and New Jersey — but it’s banned in Connecticut and included on the state’s invasive plant list.

Go figure. Nothing is 100 percent when it comes to plants.

Gardens to Drive For: Children’s Gardens

By Teresa WoodardOn a recent family getaway to Baltimore, Md., I was reminded of the appeal of public children’s gardens for kids of all ages.  Even our teens loved the willow tunnel at Pierce’s Park near the city’s inner harbor.  Here’s a list of favorite children’s gardens to explore in the Midwest: 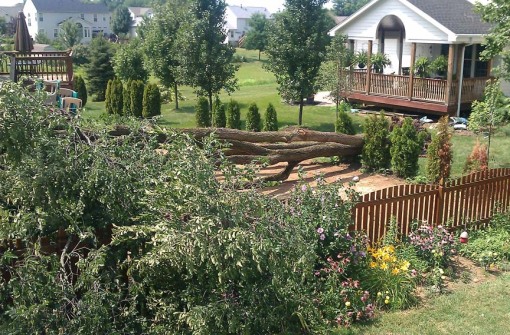 A recent Ohio State University Extension newsletter warned of the dangers amateurs face when cleaning up storm damage with a chainsaw. Curtis Young, lead editor of the weekly Buckeye Yard and Garden Line, got my attention and dissuaded me from borrowing the neighbor’s saw. Why?

Chainsaws can suddenly grab and kick back. (I don’t want to be on a ladder or in a tree when this happens, do you?)

Ear and eye protection are musts. Two hours of chainsaw racket can mean hearing loss. An eyeful of sawdust or metal dust, should the blade hit a nail or other object in the wood, may mean vision loss — instantly.

Watch out for “trunk kick back” or the “sudden splintering of the trunk as it is being cut.”  Pieces could hit the saw operator or, as the trunk shifts,  pin the operator on the ground.

Logs can roll onto legs and feet.

Live wires tangled in the tree — ZAP! — possible electrocution. This one reminds me of comments from my landscape maintenance instructor. He knew guys with patterns of metal watch bands and belt buckles branded into their flesh from such electrifying encounters. They were lucky.

A good rule of thumb I’ve heard:  If the work requires a ladder, call an International Society of Aboroculture certified arborist to make recommendations.

Then make sure the company you hire has worker’s comp and other insurance. One arborist told me, “If I lose my leg, I’ll own your house.” 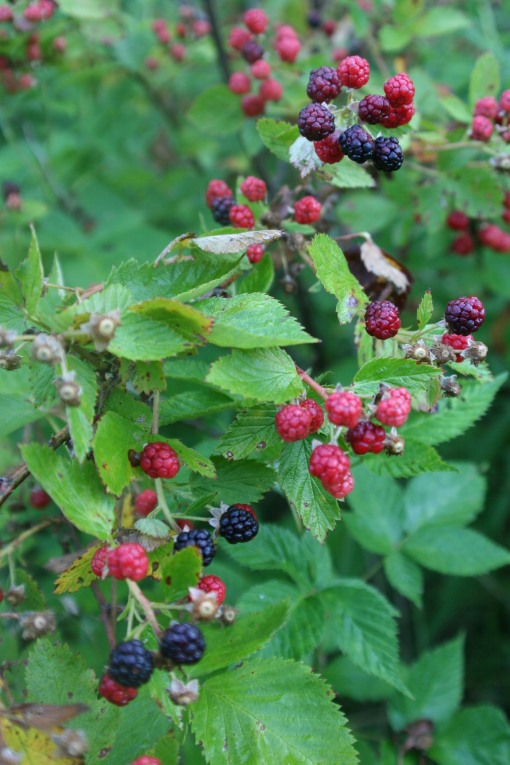 Wild blackberries, how do I love thee?  Let me count the ways – by the handful, piled in a lattice-top pie, baked in a shiny-top cobbler, frozen for smoothies and cooked in a jam.  How are you enjoying the season’s fruits? 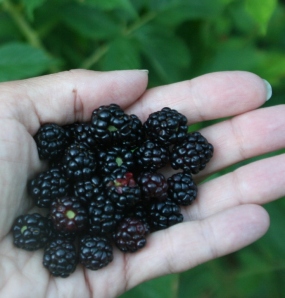 Swiss chard is a great edible ornamental for the front yard.

Turf wars are nothing new for Tamar Rudavsky and her husband, Richard Brody. For 25 years at their former Worthington home, these Boston transplants battled over grassy lawn space for their kids versus a lush vegetable garden.

Rudavsky, a philosophy professor at Ohio State University, gradually gained ground on the debate as their children grew up. Her gracious husband, a protein biochemist, gave up more of the lawn. But in 2006, when the couple became empty nesters and as they were purchasing a smaller home in Clintonville, Rudavsky negotiated a front yard vegetable garden because the backyard was too shady.

“Within two weeks of moving in, I dug up the front lawn and planted my first fall crops,” she recalls.

Rudavsky may have been a front yard gardening pioneer six years ago, but today she finds herself in the midst of a revolution. Her sentiments are strong. “I think lawns are ridiculous,” she says. “You have to tend to them, water them and fertilize them, so I’m not convinced that this is how people should use this space.”  To read more, see the complete story at Columbus Monthly.

Inspired by interior design ideas at a recent homes tour, I realized several could work just as well outdoors: 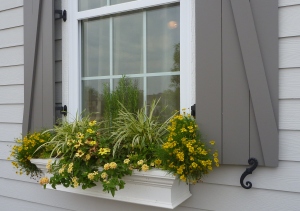 Decorators are inspired by many shades of gray.  Give a deck, patio furniture or shutters a fresh look with gray paint. 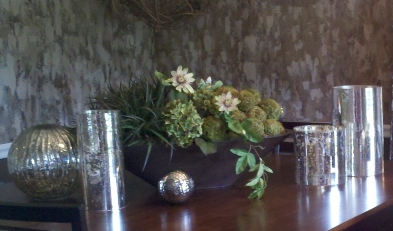 Indoors or out, metallic finishes can be paired beautifully with organic elements.

Conference attendees got a chance to view one of his “river” installations at Ohio State University’s Chadwick Arboretum and Learning Gardens.  In just one day in September of 2005, Bloom led a team of 100 volunteers who transformed a 4,500-square-foot space into a dramatic garden showcasing 1,800 donated plants which were selected for their year-round color and interest.  Here, his “river” features plantings of Geranium ‘Rozanne’ and Imperata cylindrica ‘Red Baron’ (Japanese blood grass) that flow through the garden and cross one another in the middle. Key plants are repeated along the rivers to lead visitors’ eyes diagonally through the garden from corner to corner.

Here are some of his tips for adding these dramatic river elements to a garden design: